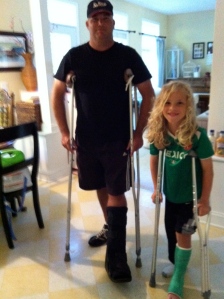 Gosh, It really has been a while since my last post! I’d like to tell you that I’ve been on a long vacation breathing in fresh mountain air, but its been nothing of the sort! Seems I’ve picked up a few extra chores here lately as Chicken tore his achilles and Henry broke his ankle…both while playing soccer! I suppose they took the “Go Hard or Go Home” speech to heart! Now, you know it just wouldn’t be right if I didn’t give you a good laugh about this ‘crippling’ situation we’ve recently found ourselves in, so here goes….

Want to know what’s more slippery than a wet fish? A seven year old that’s just had his long hair lathered with conditioner while he lays in the tub with his casted leg hanging over the side! Seriously, I tried lifting him out of the tub, and for the love of Pete, I couldn’t do it for his slipping right out of my hands!

Being seven, in a cast, and on a soccer field would really stink unless….you’re sitting amongst the 15 yr. old girls squad and getting more attention than a full bird feeder amongst a pack of squirrels! Is a group of squirrels called a pack? Oh who cares…girls, squirrels I’m buying a broom…or two!

It was explained to the seven year old that things happen for a reason and maybe some good would come out of his breaking his ankle. It just so happens that several “girls” at school were asked to help him out with the carrying of books, lunch etc. At the first school assembly one of these girls was awarded the good citizen award and he declares….”Hey, she never would have gotten the chance to help out so much if it hadn’t been for me..we should share that award”!

Ever wonder what it looks like when a 41 year old man with a torn achilles mows the lawn? Me too! At this house it looks a lot like his crazed wife trying not to get drug down the hill by the mower or engulfed in poisonous Virginia Creeper!

Ok, enough of the bad. Want to hear some of the good? Alright then! Here ya go…

I’ve been a closet children’s book reader and writer for quite some time…In my opinion there aren’t many places better than the children’s section at the library! Anyhow, I began sending in my manuscripts to publishing houses a while back and guess what?

I’M GOING TO BE PUBLISHED!

Yep, you read that right! I’m going to be a published author! I can’t give you all the details just yet, so keep checking in for updates!

I should keep checking in myself! I am planning on some blog changes shortly, and will be posting on a more regular basis! In the meantime….

I have also opened up shop on Etsy! Head on over and check it out if you get the chance. My shop name is…. littlebirdiebleu

Thanks for stopping by…hope to see you again soon!