Alright, for those of you without children I’m just gonna lay it out for you right now….being a parent is a lot like being a pinball. Just when you think you are getting somewhere, out of nowhere something smacks you right in the face! Find that amusing do you? I’ll tell you what’s not amusing and that’s a toddler hurling a cell phone at your face from the distance of about 2 feet! I didn’t take The Lord’s name in vain, but I most certainly called out his name! Now, I know you’ve found yourself in a certain shopping store (Wally World, let’s just call it like it is), and from an aisle over you hear something along the lines of ‘I’m gonna give you to the count of 3 to put that down or I’m gonna rip your head off’! Ok, so for those of you without children this might sound a bit drastic and a little harsh, but to those of you with kids I know you are nodding with a smirk on your face..you’re just thrilled you aren’t the only one!

Once you have kids you’re gonna wonder if everyone has gone deaf or if you have just gone mute….Man if it could only be the other way around sometimes! I don’t know how many times in one day I say “Quit hitting him”, but after what I’m sure is at least the 20th time, someone says “I never heard you say to stop hitting”! “Really? Because I’m pretty sure the neighbors heard me”! I’m not sure if having three boys is the reason for all the fighting around here or if it’s just because lightning hit the house a couple years ago, but I reckon I should just start charging admission to the daily event nonetheless! 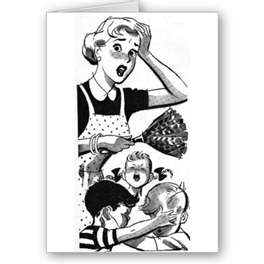 Once you have kids, you can kiss your 8 hours sleep goodbye! I keep reading (must be from those without kids) that I should be getting a good 7-8 hours sleep every night…could someone please inform my children of this necessity, because they didn’t get that info. either! (Could this possibly be the reason for the extra lines I’ve found growing on my face lately?) I’ve got one pretty stealthy child that somehow manages to crawl into our bed every night..sleeping with a donkey might be a step up! I can’t tell you how many times I’ve nearly been kicked off the bed! Why don’t I just take him back to his bed? That’s funny… you really don’t have any kids do you? Because he is a ton of bricks that’s why! I honestly can’t lean over the bed and pick up his lead filled body! Sometimes I can get Chicken to take him back to bed, but as any wife and mother knows, Dad could sleep through anything, and sometimes trying to explain to someone that is only half awake that I need him to carry our son back to his bed, not wander the halls aimlessly at 3 in the morning, is just not worth it! Also, my children do not sleep in! Apparently their tummies are set on early, and it doesn’t matter the day. Henry, who could honestly win an Academy Award, insists that he is starving…he even adds a little drama by throwing himself on the ground and wailing as if he hasn’t been fed in weeks! He really ought to be walking the red carpet any day now.

And let’s just talk about taking 4 kids into a grocery store together for a minute shall we? People see me coming and wonder why I look the way I do. By the time I get out of the store they know dang well why! They’re probably just relieved I managed to get dressed! There has never been a more accurate comparison than being pecked to death by a chicken and taking your children into a grocery store. You walk through those double doors and the ‘can we buy these‘ starts. It wouldn’t be so bad if I heard it just once….per aisle…..per kid! By the time we are done, just hearing the word ‘Mom’ uttered by any one of them and I automatically shout NO, NO, NO! And with 4 kids we are talking 8 arms. Do you know how many things 8 arms can grab at a time? More than once I have gotten to the front of the checkout line and started pulling stuff out of my cart that I did not put in there!

Now, by now you’re thinking parenting can’t be at all fun or comical…but your wrong! It is the best form of free entertainment around. Where else can you hear the following words….

“I didn’t push him down the stairs, I just gave him a boost”!

“I only kicked his ball down the hill because he was trying to kill me”!

When forgetting to tell me he used the last Underjammers, Henry claims “Well, sometimes my eyes get confused and I don’t know it’s the last one”!

When sitting in the bleachers behind home plate at his brothers baseball game, Henry is loudly keeping count of every strike. Finally, one player turns around and says “Really?”, to which Henry replies “Well, if you hit them, I wont count them”!

“Sometimes my feet get cracky”!

“I could really appreciate you if you would tell me what number comes before 20”!

“Soo Jen is Mexican, because she got mad when someone called her Chinese girl”.

“When I get big I’m gonna be Peter Pan and beat those Pirates”!

Throw all of those things together with a toddler dialed 911 distress call while your in the shower and you’ve got yourself some knee slapping good times….well, once you get out of the shower and greet the swat team that has your house surrounded and promise to never let the toddler near the phone again! When someone figures this one out, would you please let me know?