We spent Saturday on the soccer field…big surprise right?
*If you couldn’t tell, beau is the one with the skull cap..he wears it to keep the hair out of his face! 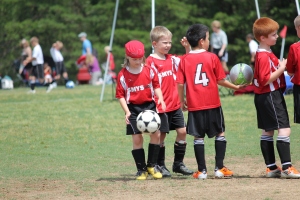 Can’t say as I’d rather be anywhere else though….I love watching the boys play soccer!

Beau really oughtt’a patent the phrase “Go Beau Go”….He must hear that a million times during every game!

Henry also played in a soccer game Saturday…he did very well. Every time he scores he tells me he got that one for me and Nora! 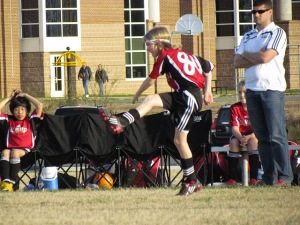 Samuel had a game on Sunday..they played a great game and came away with a win! Samuel had an amazing goal on a corner kick…..It was a total ‘bend it like Beckham’ moment!! The best part is that I actually managed to get it on video…..can you say “Super Mom”!!! 🙂

Ok, so you know we didn’t make it through the weekend without some funny stuff from the kids..so here goes….

At the end of Beau’s 1st game one of the mother’s told me that Henry had gotten into a fight with another little kid…I know what you’re thinking…why isn’t she watching her kids?…Well, I was watching/videoing the game, feeding Nora crackers as I rocked her stroller and was trying to keep Henry in my eyesight, so give me a break if he got away a few times! So anyhow I kept Henry close and then went to the car with him and talked about what had happened. Here’s what he told me…..

Me “Did you hit one of the other kids”?
Henry “Well he hit me first”!
Me “What were ya’ll doing when he hit you”?
Henry “We were playing pretend and I was the Dad…the girls told me to be the Dad, and he wanted to be the Dad so he hit me! I hit him back…I had to do it Mom”!
Me “Are you sure you didn’t hit him first”?
Henry “Ugh, why would I do something like that”?

I must say it was hard to keep a straight face as he was telling me that He just Had to hit him back…like it was the rule or something!

The other funny statement came from Beau. He had a baseball game scheduled for the same time as one of Samuel’s Speed & Agility training sessions (soccer). Beau loves training/playing with the older boys and he LOVES soccer, so he wanted to go to Samuel’s practice instead of his baseball game…which I honestly can’t blame him, half the baseball team can’t even throw/catch/hit the ball..makes me wonder why people sign their kids up for stuff if they aren’t even going to spend some time with them teaching them a little about the game! Don’t get me wrong, Beau loves baseball too, just when he’s playing with kids that actually know what they are doing! Anyhow, we told him he had to go to his game (he singed up for it, he was gonna finish it) but he kept crying saying “I want to go to Speed
Magility training! 🙂

Hope your weekend was as fun as ours!