So what do you bring with you when delivering newspapers and there’s been talk of a giant snake on the loose? 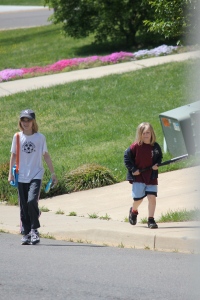 Well your little brother and a baseball bat of course! 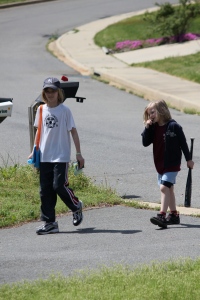 I don’t know what they thought they were going to do if they saw that snake…beat it to death? I guess carrying around a baseball bat just makes you feel safer…even if you’re not! I’m with them…I’d rather have something, anything, in my hand if I were to be confronted by a giant snake…well it wouldn’t technically have to be giant to get me to swinging like The Babe because I HATE SNAKES! I’m so scared of the things that the other day when we were working in the garden (the boys and I..Chicken was at work), they thought they’d play a little joke on me. We had just poked around and found a nest of baby bunnies in my veggie garden, which made me jumpy, so when I was bent over pulling weeds Samuel decided it would be funny to yell SNAKE! Not only does he yell this, he also hightails it over my chicken wire fence (you know, the one to keep the bunnies out) as he yells it! So you know what happens next right? Yep! I started screaming and I jumped the fence and took off….leaving Beau & Henry behind in the garden…..to fight the snake themselves! Bad Mama, Bad Mama! I can’t believe my first reaction was to run instead of grab my kids! Not that they cared, they thought it was funny as all get out…watchin me jump the fence and all….bet my neighbors got a kick out of it as well! Let me just say they are lucky I didn’t see that 6ft. long snake in the road BEFORE they played this trick on me!!!!! My final word on snakes…..EVIL!!!!! Bbbllaaa…..I’m gonna have the Hebegebes all day from this post!

One of the bunnies we found in the garden! 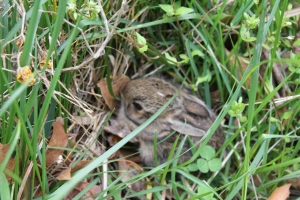